I’m thinking about doing everything in haiku.

You know, spend six months, maybe a year really just doing haiku. Not just in writing. I thought perhaps I’d try to make everything I say fit a 5, 7, 5 syllabic pattern. I’m not quite sure about that, though. I don’t mean that strictly speaking some of what I’m likely to say would be senryu instead of haiku, I mean that I may, in the interests of maintaining my prosaic flexibility in this new mode of communication branch out to tanka.

You know what else would be really great? Only sonnets for a week or two. Imagine giving next month’s sales report in 14 line chunks with a volta in each section. That would turn heads at corporate, I’m sure.

Or maybe just haiku after all. For consistency’s sake. That’s what Sheila always said about me, that I lacked consistency.

So maybe if I do this and she gets wind of it—maybe Brenda down in accounting would mention it to her when they have yoga class together—then she’ll think twice about having left me.

Of course, if I was really serious about this, I guess this line would’ve already been 5-7-5.

Wait, maybe it is. Is it? I’m terrible at scansion.

listless
sinews like tissue paper
so you don’t risk moving too fast
it’s a stupid thing
to be this rich
send me my paycheck
courtesy of white privilege
right to the front door
no, put it on a little mechanized robot delivery drone
so it will hover to me
where i lounge
in Dionysian girth and godlike repose
cable remote in hand
and nothing on

This isn’t Newt Gingrich, but I wonder if Newt knows that climate change threatens little guys like his namesake here.

Get this: Newt Gingrich has called (via Twitter, mind you) for John Kerry to step down as Secretary of State.

Why? What affront would merit such a demand? Well, since it’s coming from a Republican, the current champions of false outrage and rulers by hyperbole, “merit” is probably too strong a word. So as I clicked on the CNN link reporting this latest Gingrichism, I was prepared for new revelations of perceived fault in Benghazi, or perhaps criticism of what Newt feels is softball cuddling of Iran, maybe even some criticism of the administration’s handling of Syria.

No, none of those. Newt says that Kerry must step down because he is “delusional.”

And he thinks he’s delusional because Kerry said that climate change was “the greatest challenge to our generation.”

Okay, Newt, listen up: Despite your anti-science, anti-reason friends in the Tea Party (Have these Founding Father worshippers forgotten that faith in the capacity for reason was THE central tent of the Enlightenment thinking that guided our Founders?), the jury is not out on climate change.

It is happening. We are the culprits. It is accelerating.

A few years ago–just a few years ago–scientists speculated that climate change might be bad enough that by century’s end, the North Pole would be ice-free in summer.

That projection has now been moved up to mid-century.

These are facts, Newt. And yes, these facts will become increasingly inconvenient for the citizens of the world in the years ahead. Climate Change has the potential to be the driving force behind human migrations, regional conflicts, and economic shifts in the 21st century.

If that’s not a contender for “challenge to our generation,” then you must think an alien invasion is imminent.

Really, Newt, isn’t it time you and your ilk grow the hell up and start helping us deal with real problems? There may be a place for fiscal conservatism and maybe even “traditional” values in our national discourse.

But juvenile nonsense like this–which might as well be denying that Earth revolves around the sun–isn’t heaping anyone, least of all you and your party’s prospects with the electorate.

The new car has keyless entry.

The dealer gave us a doohickey (I know that the technical name is a “fob” for this small, semi-ovular, semi-rectangular device that uses microwaves or some other kind of science that pretty much is voodoo as far as I’m concerned to communicate with my car, a thing I still tend to feel, if not “think,” one should not communicate with in any sophisticated manner; meaning that one should only communicate with automobiles through gearshifts and steering wheels and pedals and receive communication in return with nothing but guttural engine noises) that allows us to simply walk up to the car, pull the handle and then climb inside.

But I am afraid of this thing, this fob-derived power to instantly open the doors.

Somehow the car knows that this fob (where did they come up with this word, “fob?” It sounds like it should be an acronym, but what for? “freely open…” What? It confounds me. Seriously, I often find myself lying awake, with the spectral shapes of all the acronyms in my life circling above me like spirits of the dead, and then there, among them, is “fob,” wickedly indeterminate in its origin and meaning.) is in my pocket. But how much can this car know about the whereabouts of this fob?

What if I should find myself in one of those situations–like always happens in the movies–in which there is a psychopath chasing after me and I need to lock myself into the car in order to protect myself and all my bodily organs from harm? Will the car know that I am inside and that it should no longer open just because the dookickey–er, fob–is proximal? Will it know when I am in desperate need of doors that simply lock?

And what if, on some occasion, I wanted to be locked out of my car, as sometimes people wish to be. After all, things cannot always go our way. Hardships are inevitable and it is far preferable to face the inconvenience of being locked out of a car than, say, come down with tuberculosis or be chased by a psychopath.

I really wonder if the engineers at Toyota have thoroughly considered all of these things. 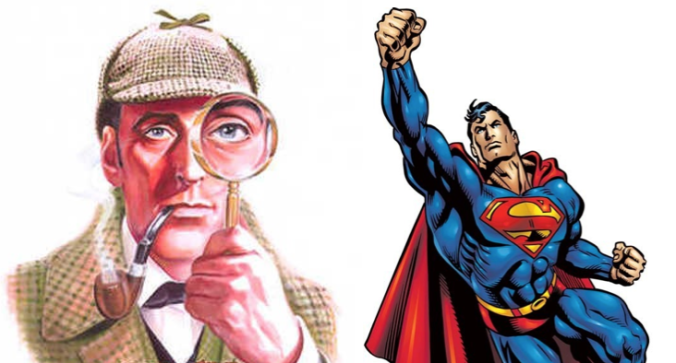 Something caught my eye this morning at CNN–a link over to their sister site Entertainment Weekly about the recent end of the BBC’s Sherlock.

Now, if you’re a Sherlock watcher but haven’t seen this most recent season finale, then please hit your back button immediately as we are about to cross into spoilery territory.

Apparently, Jeff Jensen (how cool is that name?) of EW is upset. It seems that in the recent episode, the newest incarnation of Sherlock Holmes has–duh duh dum–killed someone, something he never did in the canonical stories by Sir Arthur Conan Doyle. Now, I don’t watch this show, but naturally, being the arrogant ass I am I feel qualified to comment on this controversy.

You see, Jensen broadened the issue by relating it to the recent reimagining of the Superman lore. In case you missed it, fanboys freaked out over this summer’s Man of Steel because in it, Supes snaps the neck of General Zod to prevent him from melting a nice family in Metropolis (I’m totally not warning you about spoilers for movies that have been out for more than six months; too bad!).

Now, I’m mystified by the complaints about Superman’s conduct. There are a lot of things I can find fault with in the Man of Steel movie. Superman allows his dad to get eaten by an F5 twister (when he could have just run over at normal speed and held his pops safely on the ground behind a car where nobody could see) and trashes about a third of Metropolis in his big (and oh, so long) fisticuffs session with Zod instead of flying away and luring the Kryptonian baddy out of town (like in the original script, Zack Snyder!). Those actions leave me scratching my head, but killing Zod was absolutely a no brainer. And do the geeks who complain even remember the original Superman movies from the 80s? In Man of Steel, Superman has to kill Zod to protect human life and he moans (gloriously done, Henry Cavill!) with anguish at the horrible weight of this necessity. (Again, well done scene. One of the best in the movie.)

In Superman II from the 80s, though, Superman killed Zod callously and for NO GOOD REASON! Seriously, have the fanboys forgotten this? Superman tricks Zod into a situation that deprives him of all his powers and then THROWS HIM TO HIS ICY DEATH. He was normal and mortal–as weak as a human at this point–and the supposed pinnacle of Boy Scout goodness just chucks him into the polar abyss. Hello!?!

Therein lies one difference between Sherlock Holmes and Superman. Superman never was a singular character with a coherent identity. He has always been a pop culture pastiche of many different artists’ contributions. Originally, he couldn’t fly. Then once he blew out a sun. Yeah, it happened.

Holmes, though, was the product of the lonely mind of a man–a true classic.

Should he have killed this maniacal power-hungry fiend he faced off against in the BBC series? Was it beneath his dignity? Should he have outsmarted him instead? Here’s where I have to admit I just can’t say anything too intelligent, since I haven’t even seen the episode in question. But I’ll try anyway!

As I understand it, this baddy had blackmail material and leverage on just about everyone powerful in London. So maybe Sherlock just walking up and shooting him IS outsmarting the guy. “Oh, you think that you have covered all your bases by entangling all of England in your web? Well, you forgot that sometimes the world is brutish and that no one lives forever.”

But it’s not really about whether Holmes had a choice or not. That (and my rant about Superman) is beside the point. The real issue is the integrity of a character that doesn’t really belong to the producers of the current series on the BBC at all. Both Sherlock Holmes and Superman belong to the ages now.

Jensen’s complaint, then, is a legitimate one. In an age of entertainment that constantly recycles well-worn characters and reimagines them, what precisely is sacred in the interpretations of these icons? Who gets to decide what they will and will not do? Who gets to pass judgement on what interpretations are and are not legitimate?

There’s no objective answer to these questions and as long as the age of the reboot and sequel continues, we’ll have to ask them and, at the same time, be disappointed in the impossibility of answering them.

In the end, we have two choices: Just live with the fact that Hollywood (and the BBC, apparently) have discovered our weakness for the familiar and are going to continue to bank on it ad absurdum. Or (and I think this sounds like a grand idea) stop watching this derivative stuff, no matter how slick and well-made it is, until the producers start bankrolling only original programming.