I haven’t watched the video. Yet I’m haunted by it.

I know that there is nothing especially novel about the savagery inflicted upon James Foley by some hooded spokesman for ISIS. I remember Daniel Pearl, of course. And I know there were others in Iraq and other fronts on the “War on Terror” who were dealt similarly inhumane fates.

I have opposed that “war” (against an emotion) with every breath, but still when I look at the stills, knowing what follows these freeze frames, I think of that man behind James Foley.

I think about that man in black and I become angry.

Seeing him there, knowing what he is about to do to a fellow human being…

It makes me want to see the whole of the United States’ very bloated, but very powerful military machine come down upon that desolate land of Iraq again. It makes me want to see smart bombs and Abrams tanks and Hellfire missiles and shock and awe and depleted uranium–and whatever else we have to show for trillions upon trillions of dollars in “defense” spending–wash over that failed state and this new, barbaric caliphate like a Biblical plague.

Over this coward in black.

He’s hiding behind that mask because he knows if he shows his face someone on an aircraft carrier will paint his name on a cruise missile this very night. Then one more explosion and he’ll be gone. How does that compare? The precision deployment of advanced munitions vs. sliding a blade into another human being’s neck, another human being right before your eyes. Criticize the inhumanity of dropping bombs from drones and scoring surgically precise kills via computer screens half a world away–and I have, I have criticized exactly that a thousand times–but it is still nothing compared to the brutality of feeling another human in the world directly before you–feeling the presence of that life through the warmth of the air, the smell of his terror, the movement of his breath–and snuffing that life out with your own hands.

It cannot be. I would rather be the cold, imperial America, playing puppet master and blasting columns of enemies from afar. Give me that any day over something so perverse as the world this man in black thinks he is bringing forth.

Let’s show this man what America’s military can really do. Let’s let loose the full fury, the things we had on the drawing boards to stop Russian tank columns in Europe, the dark and sinister weapons we’ve kept chained in lightless vaults until the day we really, really needed them. Let’s forget all the hearts-and-minds restraint, with smart missiles and official apologies. Just hit that patch of nothing on the map with enough incendiary rounds to turn the sand to glass.

No, I don’t really want these things, but it’s tempting, isn’t it?

I want evil to die out from the world, is what I’m saying.

A childish wish. A simplistic wish.

Since Analog wasn’t interested in it, I have restored “Daemonus galateas” to its rightful place on the Stories page.

Sadly, though, I took down the link to “Mending Wall” since Fiction Brigade is now (apparently) defunct. Sigh.

I’m totally still listing it as a publication credit in future queries, though.

Claudia,
Claudia,
Claudia,
I wish there was a night-you
spectral, perhaps
but even better:
solid and emanating heat
to come down and sit silently with me
while my thoughts
my little, little thoughts made of knock-off serotonin and second-hand dopamine
buzz down highways of light in the air before me
and then fizzle into half-baked intentions for tomorrow
tomorrow,
tomorrow.

You can’t tell.
He might be better with a wife,
this ghost-me that lives on past
the sharp, black line when you and our improbable progeny lay your heads down

Will they get it? This thing I’ve got.
Lurking in the creaky ladders of their chromosomes, maybe.

Someday maybe the children will call me from distant ports
“Hey, Dad, can you sleep?”

But will it be a comfort at all,
to not be alone
like that. 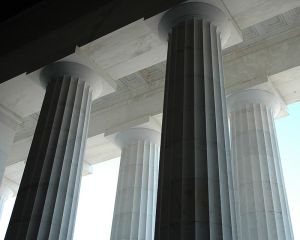 Greatness has form, substance.
It is not
this buzz of words behind the walls
half-heard, half-imagined;
not the unresolved wishes,
not the blight,
being troubled by unrealized ideas of one’s self,
of other lives, unlived

Not, in the end, the charred offerings

In the full light of day
what other aspiration is there
but to be master of a city of Justice
that survives conflagration
for a day, at least

to be Exalted, to be sure,
when the dying begins